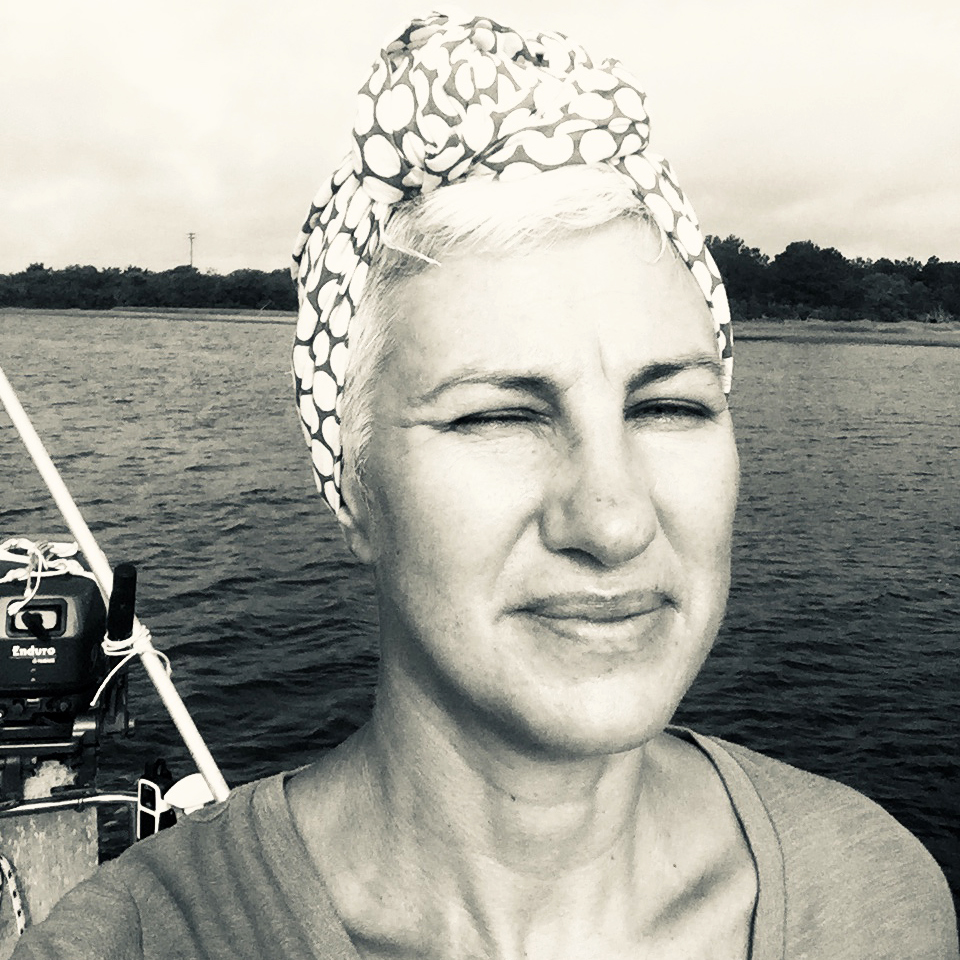 Around midnight, sixteen hours into our trip, the wind dies significantly, so we motor sail the remainder of the way to Charleston. We have made good time to this point and the motor helps us stay at good speed. Along the way this year all three of us have come to dislike motoring, but sometimes – especially when we’re tired from an overnight sail – its loud and smelly grumble is a welcomed nuisance. So it is tonight.

We arrive at the mouth of the Charleston Harbor and Fort Sumter by 1:30PM and anchored by 3:00PM, this time in the shadow of the decommissioned aircraft carrier the USS Yorktown. Finally, a good use for that thing.

Charleston is a city we have already visited once on this trip. We don’t tend to go back to cities. It’s one of the great luxuries of traveling by boat along a populous coast. The small number, three, of double visits are St. Augustine (where my parents live), New York City (I mean, who wouldn’t?) and Charleston. Less than visiting out of desire this time however, and more out of pragmatic reasons, we stop because Charleston is in a good location on our northward push up the coast. Plus, its huge, protected harbor makes for pretty good comfort, strong current notwithstanding.

You would think that returning to a city, especially one we don’t know that well, would mean we would get to further explore, see things we didn’t the first time through. But that’s not what happens. Now that we know certain aspects: certain places, certain routines, we stick to those. We spend a lot of time on King Street, we have a drink at the Craftsman Kitchen, dinner at Barsa, and even stop at the Harris Teeter on our way back to the boat like we did the last time we were here. The one notable new place we discovered this time, however, is Blue Bicycle Books, one of the best bookstores we have visited this whole year/trip. Housed in an old row house, the shelves have a mix of new and high quality used books situated in small rooms and corridors around beautiful mid-century furniture. This place and collection is so great I bought two books – the kinds printed on paper –  a rarity for me in the age of e-readers but I so badly want to see places like this continue to exist. 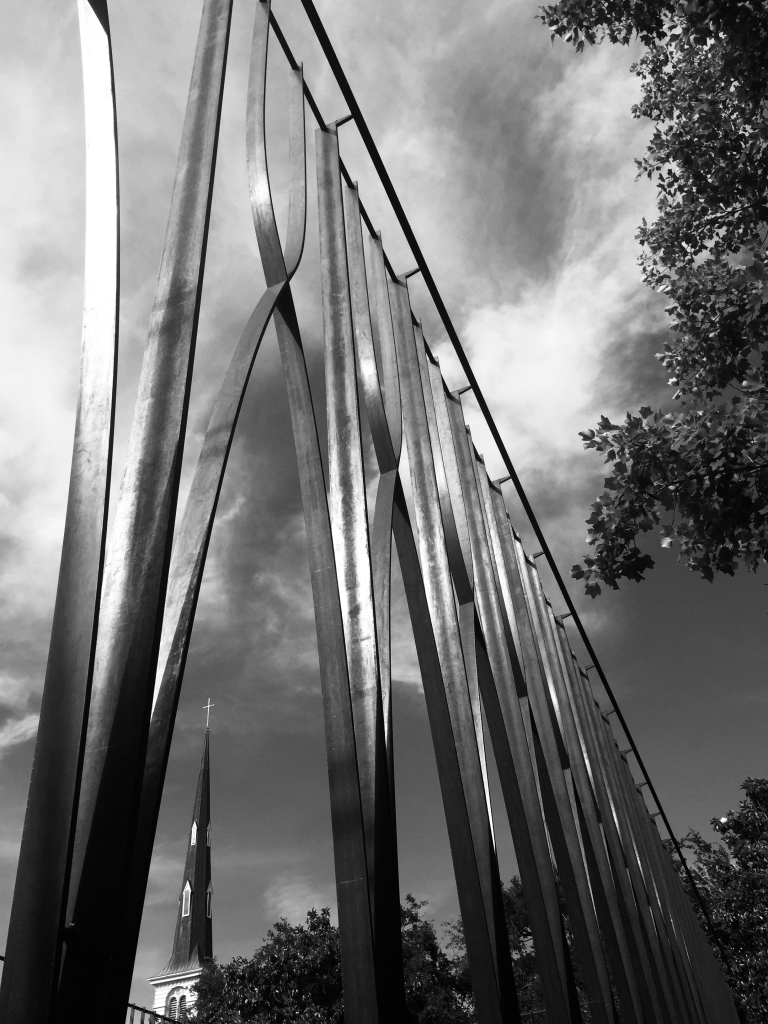 The Holocaust Memorial is right next to the John C. Calhoun memorial. Calhoun was the 7th vice president of the US and a staunch advocate for the right to own slaves. Is there no end to the irony? This sculpture needs to come down, Charleston.

Originally, we were going to wait out some weather in Charleston. Instead however, we are going to take this window to push northward to Beaufort, a town we didn’t get to thoroughly explore on our way down. Plus, our friend Patrick’s girlfriend, Annie, lives there and we are hoping to catch the two of them for a visit before they leave town.

7AM Pull up anchor.

The wind is good at 10 – 15kts of speed, warm, from the south. We are heading northeast following a sunny crack between thick clouds to our west and wispy ones to our east.

Our ride is shorter this time, only 120 miles, but it still requires an overnight. By the time my first sleep shift arrives at 8PM, I am not tired. I lie down and plug into my audio book. I have been listening to Endurance, a memoir by astronaut Scott Kelly about his year at the International Space Station. Every once in a while I get a book that is out of character from what I usually read; macho daredevils are not my thing (even IRL). I am, however, enjoying it. Not for the obvious similarities with our current situation – confinement, isolation, a whole year – but for Kelly’s rather convoluted path to becoming an astronaut. Surprisingly, it’s his perseverance in this journey, not the one to space, that is more relatable and inspiring to me.

As I lie in bed I watch the sky’s light dim to dark. The boat is now tossing. I imagine the wind has lessened because we are feeling the sea’s chunky topography more. Every new surge causes the jib sheet hardware to bang on the metal deck first on one side than the other. I turn up my headphone volume to cover the din, but this only makes it harder to relax. I get exactly zero sleep.

Arriving on my watch at 11:30PM I help Glenn mount the pole on the starboard side so we can sail with a wing-on-wing configuration. I am jealous of the sleep I picture Glenn will get as a result of a steadier ride, but it’s for naught. The new set up, while gaining us speed, does little to stabilize the boat and side to side rocking with its loud banging continues. By 3AM when Glenn comes to relieve me I can tell he’s hardly slept, but in the midst of my own exhaustion, I can’t offer him more rest time. Selfishly, I dive below.

By noon we are moored in Carolina Beach, NC in a small, well-kept public mooring field. Wrecked from virtually no sleep, Glenn and I both pass out for a couple hours.

In the late afternoon, I get the itch to go for a swim at the beach. When I ask Ava if she wants to tag along, I get a solid scoopful of teen scorn, “How many times do I have to tell you that I hate the beach, mom?” Ugh, I don’t know? Maybe as many times as I have to ask you to do the dishes? Or maybe as many times as I have to tell you to clean your ears? Or maybe just as many times as things I could say things here… I consider responding. I mean, if repetition is the currency in this game, then really, I am winning by a lot. Just then Glenn jumps up and saves us agrees to join me. We inflate Svetlana and she floats us to shore.

Carolina Beach is a bustling beach town with a densely packed assembly of brightly colored rentals. I can just about read the town’s zoning regulations by scanning across the landscape, so maxed out is the majority of construction by developers here. Every once in a while though, we see a leftover, much older, much smaller bungalow or craftsman, a remnant from a time when the town grew organically according to domestic not economic needs. We walk the three blocks east toward the ocean side, crossing two, two-lane streets hectic with all varieties of traffic. Luckily, Carolina Beach is the kind of modest town where every single short street, the ones that run east-west across the barrier island, provides an access to the long stretch of sandy coastal beach. There’s no privatization or exclusivity here. Reaching the dead end of the third block, we climb a wooden access ramp over dunes and… whoa! We find crowds and crowds of people on the beach. It’s 5PM on a Sunday, it’s overcast, and still this place is packed with blankets, umbrellas, coolers, Frisbees, footballs. What’s going on? I only have to wonder for a minute or two before realizing that it’s Memorial Day weekend. Three-day weekends, obviously, have no meaning to us out here where we blend sailing, reading, cooking, and writing into one continuous activity, but I am a bit stunned to realize that it is officially the summer season. Where Memorial Day would typically have signaled the freedoms of summer, it now only serves to remind me of the finitude of our ways. Days later while looking at the map, I will point out to Glenn that there will be no way for us to get back to the ocean from our planned sail in Pamlico Sound. That’s right, he will say, the sail from Charleston to Carolina Beach was our last sail on the open ocean of this trip. I will be stunned first by the statement, then by my sadness.

Heavy rain. Glenn stays at the helm for fifteen nasty miles of motoring northward before throwing in the towel. The rain itself is bad enough, but hovering in circles waiting for bridges to open makes the whole experience drudgery. We aim to get further tomorrow, though the forecast show the weather to be bad through Wednesday.

Tonight on Netflix we watch a pretty good movie called Too Late. It features the great John Hawkes and an intricate story, told out of sequence, of a relationship between a detective and a woman he knows who gets killed. Coincidentally, I have been listening to John McPhee’s audiobook version of Draft No. 4; On the Writing Process in a chapter on techniques of telling stories thematically rather than chronologically. A little moment of serendipity.

Today we motor northward on the ICW for thirty drizzly miles. I share the helm duties with Glenn in two hour shifts, which is about the maximum I can pay attention to the relentlessness of the ICW, which in this phase resembles long highway driving. During my shifts I finish McPhee’s Draft No. 4. 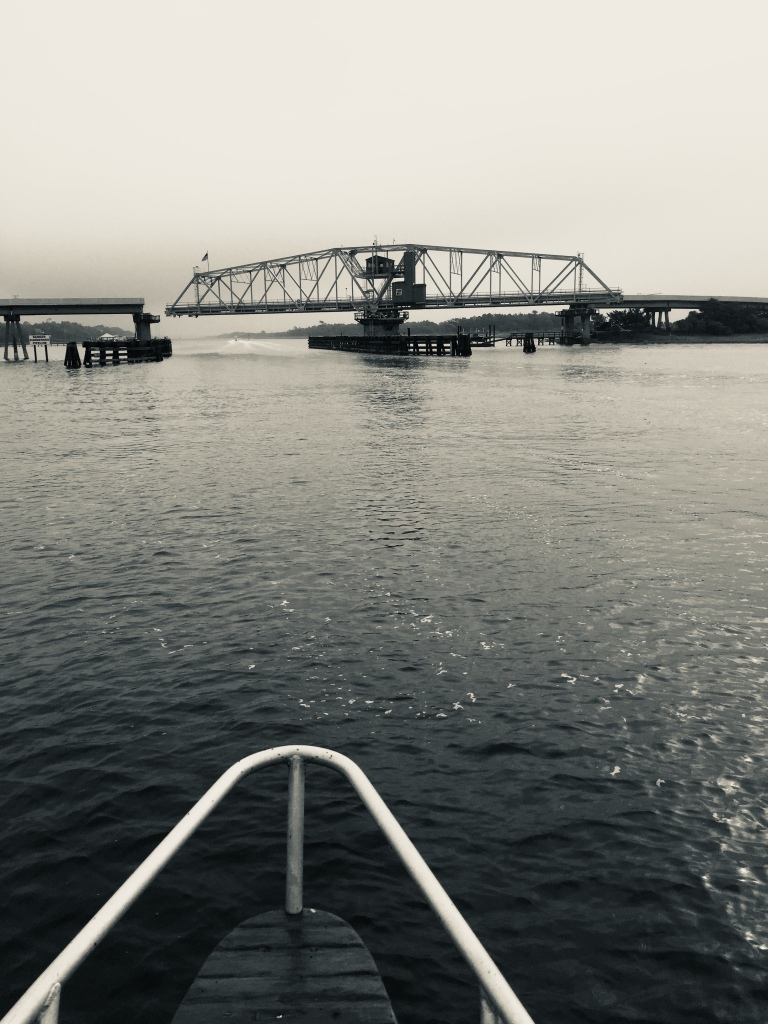 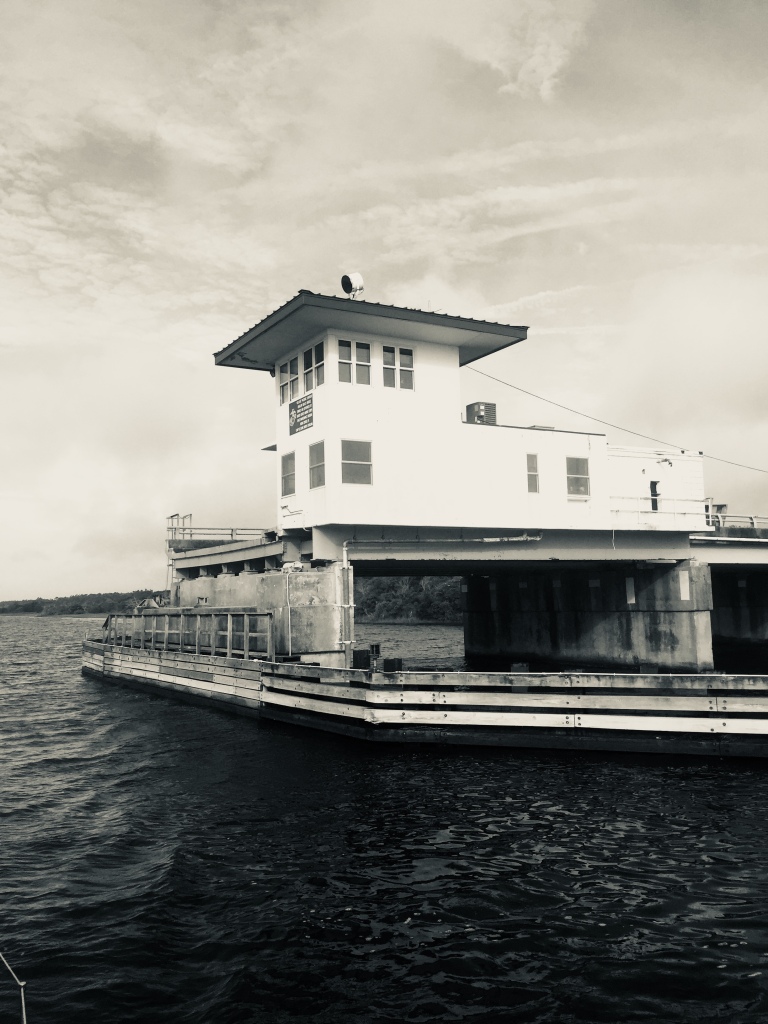 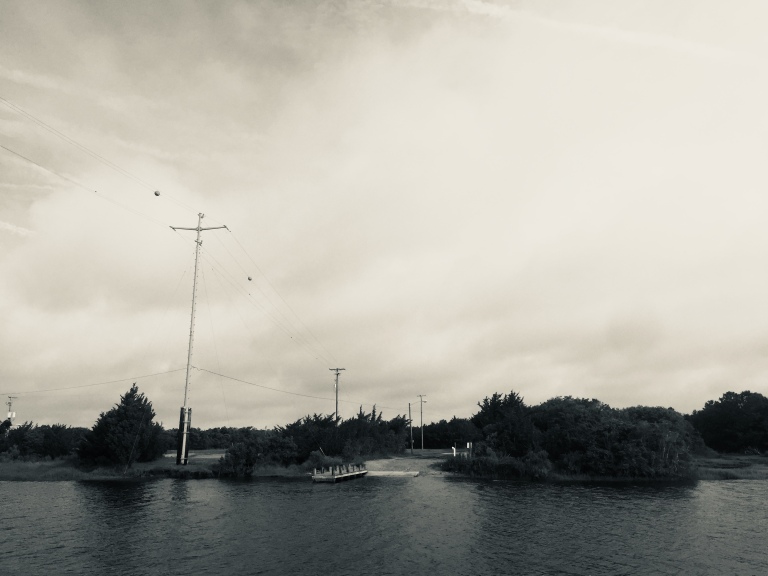 We motor the remaining thirty-eight miles today and arrive in Beaufort by 3PM in very good time due to some helpful currents flowing in our direction. Shortly upon our arrival we get an invitation from Annie (and Patrick), for dinner and showers at her house. The immense pleasures of a hot shower, having someone else cook for us, and simply spending time under a solid roof for a couple of hours are always multiplied out here. We basically live outdoors like wild baboons picking nits off each other. We accept the invitation in under three minutes.

Annie is a wonderful host. She’s a retired elementary school teacher who has had a long history in the world of sailing, having owned and captained several large wooden sailboats. Throughout the evening, spent entirely in her kitchen, she tells me about her husband to whom she was married for thirty-five years before he succumbed to cancer last year and about how fortunate she feels to have met Patrick, a gentle and warm man. All the while, she is preparing a delicious salad with greens from her garden and a pasta with garlicy shrimp and parsley. It all feels so welcoming and warm and fun.

P.S. Tonight I am reunited with my camera, so better, or at least more, shots will be coming in the weeks ahead.

Here’s a wired thing that’s been happening. Every time I go through Ava’s cabin and she’s sleeping I have noticed a disturbing trend. Stuffy, her long time stuffed animal companion, is always sleeping in the same position as she is. Should I be worried? 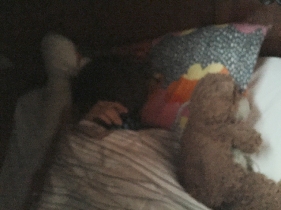 2 thoughts on “49. Northward Charleston to Beaufort”

This set of writings documents our sabbatical journey on board our sailboat Netzah. We are taking a year to travel around the Atlantic on route which will take us from Canada to the Caribbean Sea. We are setting sail to these places, but also to an uncharted way of life. We expect there will be changes, but what those are, remain ahead.